60% of listed companies need to be suspended, after being attacked by short-selling institutions

Among the two delisting cases, the case of China Metal Recycling (SEHK: 773, before delisting) was the most classic. The company was suspended on January 28, 2013 after being published by Glaucus Research. After half a year, the securities supervisor used the Securities and Futures Ordinance 212 to apply for liquidation of the company. The High Court finally ruled in March 2015 that the company was listed on the alleged falsification and deliberately defrauded. The shares were eventually delisted on February 4, 2016.

Another case of delisting was China Fiber Optic (SEHK: 3777, before delisting). The company issued a short report by Emerson Analytics in August 2015. The stock was suspended on August 11 and resumed trading on September 30. The stock price plunged by 33.12%; after one year, the SFC suspended the China Fiber Optic under section 8(1) of the Securities and Futures Ordinance on October 12, 2016. According to the relevant regulations, the securities regulator may consider the company’s prospectus or notice. Such documents are false, incomplete or misleading. The shares were eventually delisted on February 14 this year.

In terms of accuracy, Emerson Analytics, Anonymous Analytics, and Glaucus Research are the highest, with Emerson Analytics publishing short-selling reports on eight local listed companies, six of which have more than one suspension within the month and three of them have been suspended since then, and China Fiber Optic finally had to be delisted.

In terms of stock price, among the 46 listed companies, the largest share price drop in 10 days was Tech Pro Technology Development (3823). Its share price plunged by 86.34% on the report’s release date, and its share price only rebounded by 24.51% after 10 days. However, there are also many examples of the company's stock price rise after the report is issued. Among them, Shenguan Holdings Group (829) has the biggest increase. After 10 days of short-selling report, its share price rose by 11.55%. However, the rise in stock price does not mean that the company is running smoothly. Among them, China Huishan Dairy (6838)’s stock price rose by 1.8% on the 10th day after the publication of the short-selling report, and then it was suspended after the account was found fraudulent.

But when it comes to an epic failure of short-selling organization, it is worth mentioning that Citron Research published a report in 2012 bashing Evergrande. Nevertheless, the report was accused by the Securities and Futures Commission to be inaccurate. Its founder, Andrew Left, was banned from investing in the Hong Kong stock market for five years. Left appealed earlier this year, but in vain. In addition to having been banned from trading in Hong Kong for five years, at the same time, he was to surrender HKD 1.6 million of profit. 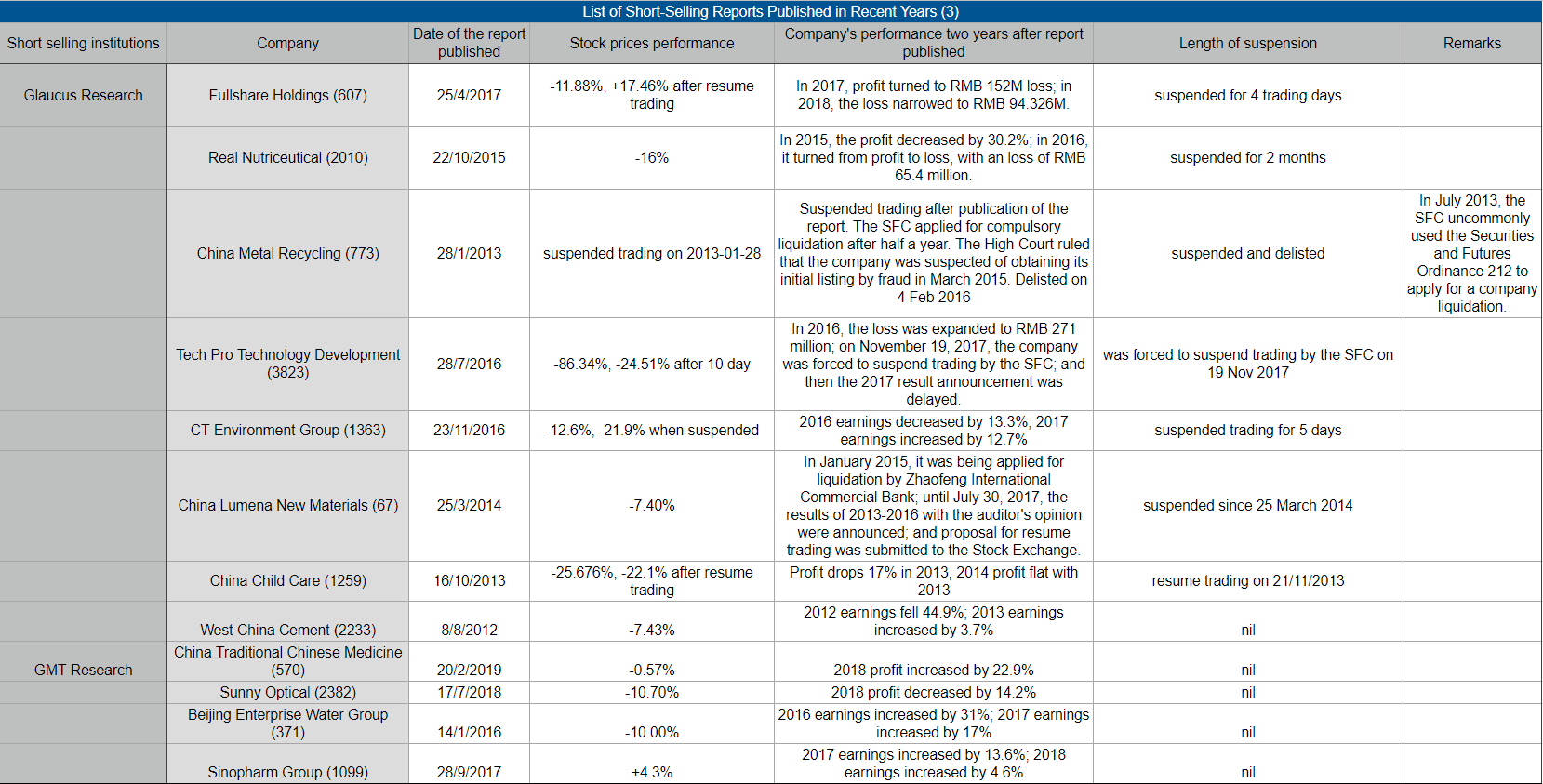